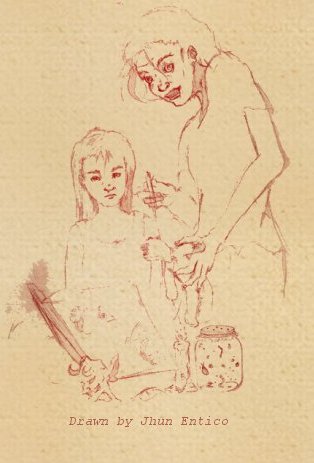 Kaperosa or White Lady. In the Philippines people believe in superstitions and mythical creatures, White lady is just one of those never ending story from place to another, especially in rural areas.

A female ghost wearing a white long dress, with a long black hair. Kaperosa a female who commit suicide because of hatred or being betrayed by her husband or fiance, murdered, other's said, they are the souls who doesn’t rest because they have unfinished thing to do on Earth.

Some people said, if you see a white lady in your house, renting or inherited from your parents/relatives, they believe that she was the previous owner and want to stay to her property.

A White lady stays in a particular place where she had a bad experience and died. Some people said that she doesn’t harm people. She will just show up and will disappear in a few seconds.

There was a story of a friend who is staying in Quezon City. They have bought the old house long time ago. It is a big house, you will notice that it was built for years now. Though some part of it was changed. But the design remains. They said, that apart from their family, there are some more unseen residents in the house. His son was in the living room and he saw his sister standing in the corner facing the wall where the telephone is located. He started talking knowing that he is not alone, but he was waiting for a response and when he glanced to the corner he saw no one. He asked his parents if his sister is at home, but he learned that she was gone since morning and not returned yet. He was confused because no one has a long hair in the family aside from her sister. He let it pass and decided to forget about what he just experienced. Then after sometime, he saw her again on the doorway, about to go inside the room. He followed her and found nobody. At this time he told his parents and siblings about what he saw. And he is not the only one who had an experience seeing the white lady. They conclude that the white lady is trying to mimic her sister.

It keeps on going after sometime until today. Even their guest feels that someone unseen is residing in the house. They are used to it. The white lady doesn’t harm them. They just consider her as tenant of the house.

White lady are often show herself in seconds only, but she will scare you to death. Some people believe that they dwell in big stress like 'balete', old houses or place where she died.

There are stories that they are waiting on the road and want a lift. After the driver approve, she’ll enter into the vehicle and close it. By the time he will ask where he can drop her, she's gone.

This are just some of the unanswered mysteries, people believed they are lost souls and seeking help from mortals.

Stories and Comments about Kaperosa