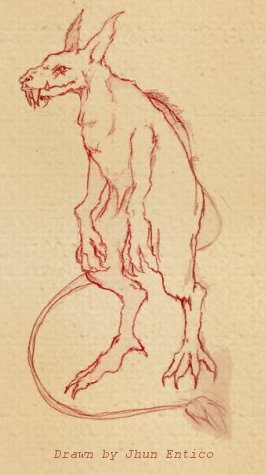 What Is The Type Of Ghost Sigbin

If we are going to enumerate the mythical creatures f the Philippines , you'll find quite a lot.

There is a creature which is believed a rare kind of an animal, dwell in the forest of the south in the Philippines. Similar to a goat and/or a kangaroo. The face looks like a bat.. with long fangs, red eyes. According to some researchers, they have found a creature like ''sigbin'' ior a cat-fox in Borneo, it is a carnivore that’s why they hunt only an animal or human being. Though researchers/scientists are still continuing their research about this rare kind of animal. But there is no pure evidence until today of their existence.

Sigbin is believed to be a nocturnal, that’s why, used to hunt in the night, easier for them to catch a victim.

Since these creatures are rarely seen, the people in rural areas who believes in many kind of myth or spirit or monster, they also believe and consider sigbin as one kind of demon and also known as pet of aswang.

Sigbin used to hunt for their food during night time, aside from eating the internal organs of a human body, they hunt animals in the forest as well...

And they even eat dead animal or a corpse.... by eating dead flesh maybe can cause them smell like a rotten human corpse. A smell that elders said to be really bad that it'll make you vomit.

Sigbin has a long tail, used as a whip. They have red eyes, maybe because they kept themeselves awake during night time and hunting.

It is also believed that they serve as an assistant to an aswang. Sometimes aswang doesn’t have a human food, they asked sigbin to hunt an animal instead for a meal. Whoever own a sigbin, is also believed to have a good luck in so many ways.

In some parts of the province, if a resident found a dead animals, they often blame it to a Sigbin.

One more belief about it is that, it can suck your blood through your shadows.... they seemed to be so resourceful in a very different manner.

This stories are based on what our ancestors used to tell us about their experience to these creatures. Just be vigilant and be safe always.

Stories and Comments about Sigbin

and if its okay can i have the contact of that guest. I badly need his/her help with regards to the confession. The guest name is Manuel C. Nesy

hi can i use the narration of guest 1142

I just want to share my own experience about sigbin, I can still remember it was one summer night late 90's when I was in my elementary days when Philippines was experiencing drought caused by El Niño. It was hard living in the province we don't have water supply yet and the only source of water are deep wells, one night, since almost all in the neighborhood gets their water in a deep well near a stream we usually wait for our turn to fetch water until the wee hours. The night was so quiet and we can barely see the moon because the location of the well was shaded with tall bamboo some of us were already sleeping while others were fetching water when suddenly someone threw stones at our water cans successively, we thought we were just being played upon by someone, until the stone thrown at us became bigger and we realized it wasn't funny anymore so we tried looking for the person responsible. Since we have flashlights with us we directed it to each and every direction to our horror we saw a carabao-like creature with eyes as red as blood sitting at the upper part of the stream, we immediately ran away of the deep well as we know that the creature is no ordinary carabao since we have not seen any carabao like it - sitting as in literally sitting like a baby in a stream with ayes as red as blood its body was skinny it had fangs, however, we were not able to see if it had hands to pick stones and throw the same. No one owns a carabao in our barangay since there is no farm there.