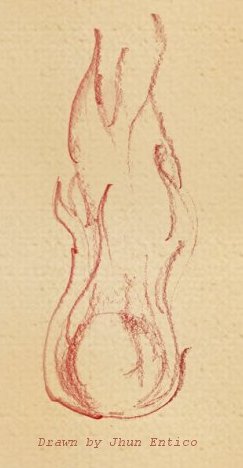 A ball of fire. Santelmo in tagalog or St. Elmo's fire.

It is believed that santelmo is a lost spirit in a form of a ball of fire. This kind of stories is famous in rural areas in the provinces of the Philippines. Since Filipino believed in the power of unknown, this is just one of them.

There are stories that if a man dies in the water, say in a river, sea or while raining, his soul will stay in the area where he died.

It’s a small bright light and slowly growing, big like a basketball.

The lost souls will stay in the land of mortals and will seek revenge or help from the people. There are souls seeking peace for their soul, asking for help or prayers to go to heaven.

Some people believed that these are children who were not baptized before their death.

Sometimes they used to scare people, by showing in the forest or in a field, in a

form of a ball of fire, it looks like a torch with a bright light. It is believed that if you follow the light, you can never go back unless somebody see you and saved you from being lost.

Santelmo is rarely seen by a few person, only in the provinces.

Other stories said that if this ball of fire spots you, it will chase you.

Santelmo who are found in the water can be dangerous because elders said they can kill you by drowning.

In some stories said, ball of fire can bring a good or bad luck, depending on how many ball of fire you encounter. Does it mean you need to count it before you run?? Isn’t it too dangerous??

Anyway, for those who have encountered a story about santelmo, after sometime chasing you, it will just disappear or slowly fading.

Some of our ancestors said, you can light a candle to the place where you have seen the santelmo, because they need peace and cant rest their soul to heaven.

Stories and Comments about Santilmo

i have a video from cctv santilmo's dancing like a fireball..

I have seen one in a small province, downtown. My sister and I were from church but then I noticed an red orange-like light, it was like a cross enveloped by a fire which formed like a ball. We got nervous so we hid on someone's house which the owner witnessed as well and she confirmed that it was really a santilmo.